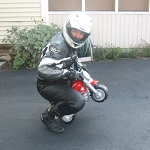 I just ordered a new battery for my 750, and I went with an AGM (activated glass mat) battery from MotoBatt. Their particular model is an MBTX14AU. Haven't installed it yet, but I've had one in my '97 Monster for years now. That battery has actually outlived a couple different batteries in the Paso - a Yuasa and most recently (and most disappointingly) an Interstate. I got this MotoBatt unit for about the same price I paid for the Interstate a couple years ago, so I'm hoping its performance is more like what I've come to expect from the other one I have.

I guess I'll have to come back in a couple years and follow up. In the meantime, I just thought it was worth mentioning. I've considered going to a lithium-iron/lithium-ion battery, but I've been pretty impressed with these MotoBatts, I figured I'd go with something I knew. I am curious though, if anyone else has gone that route - which brand you chose, and what your assessment is.
Just because you're not dead doesn't necessarily mean you're living, either.
1988 Paso 750 #753965
1997 Monster 750
Top

I got 3 Motobatt Batteries, the oldest... I lost count of the years and I replaced it ...."just in case" but I still use it as a booster.

The Lithium Batteries... I got friends very hap[py with them, any good manufacturer will be OK, provided that it is a "serious "name.

The Lipos are quite weird, on very cold weather they might have issues , so before cranking you will need to leave the lighs on for fw minutes so the Lipo warms up and then can release all its power.

The beautuy is the weight, but I am not sure if I like to have a lipo under my tank or seat...
Top

I am on my second AGM battery. The first was installed in 2009 and lasted until last year. Always kept it on a trickle charger and always disconnected the ground wire when not in use because I ride so infrequently. Unfortunately cannot remember brand name. My current is from NAPA and is identical to the 1st. Seems to be doing fine with same charger/disconnect routine. I like this type, always plenty of energy to start the motor and they seem very durable.

From what little I know about Lithium batteries and their inherent need to be controlled by software that typically rides along with the battery and interfaces with the "device" it's installed in for both performance, discharge and recharging reasons, I don't know enough to want to experiment with them on an unmatched vintage vehicle.
Top

I usually use a Deltran Battery Tender for my batteries, so with this new battery, I also purchased a fused quick-disconnect plug and plug+play voltage reader. I can leave the plug hooked to the battery and zip-tied to the frame, so I can charge the battery on the bike - but I can also plug the voltage reader dongle in (or just leave it; it only stays on for 10 seconds) for a quick check of the battery life.

I should've done this years ago.

Here's what I bought:
Quick disconnect harness with ring terminals

The Deltran battery trickle charger uses that same plug. I noticed there's also other options you can get, like a USB port, etc.
Just because you're not dead doesn't necessarily mean you're living, either.
1988 Paso 750 #753965
1997 Monster 750
Top

I've considered going to a lithium-iron/lithium-ion battery, but ...

Good choice that you didn't. Anyone who considers a lithium or also a gel battery should read the spec sheet and the charging requirements. These are quite different with the consequence that you'll have to connect an external charger on regular basis because just from riding the battery will never fully charge leaving you with only one real advantage which is that it discharges slower than a standard battery.
Top

I've got a 1988 Paso LTD, I had a charging issue which I fixed, I installed a voltage monitor that's used for solar panels so I could tell voltage in & voltage out, it works really well, I've got two voltage meters one on the battery and one from the generator, you can watch the whole thing charging the battery after startup drain and then balancing the battery etc .....

I highly recommend this, stephen@kiwisail.com if anyone has any questions

A volt meter is a good thing.

Batteries rarely let you down of themselves unless they're cheap crap. Its more likely faulty charging systems and neglect that let batteries down.
The compatibility of regulators is an issue in regard to LiFePo4 (lithium) batteries. In reality the lithium batteries are 13 Volt batteries. A healthy regulator is paramount.

I have used Shorai lithium batteries and got 10+ years out of them. For AGM batteries I use Yuasa or Motobatt.
If you buy a cheap regular battery the risk is that it will fail easily, but buying a cheap lithium battery runs the risk of failure and burning your bike down if your regulator goes rogue.
2013 M1100 Evo Street
2004 GSXR750 Track
Top

I also use Dekka AGM

unfortunately Covid seems to be the only thing readily available these days
Ducati,making mechanics out of riders since 1946
There's no problem so bad that a little fixing can't make it worse! : )
If it ain't broke keep fixin it till it is
88 750
90 906
92 907ie
Top
Post Reply
11 posts • Page 1 of 1