I have just measured my 906 valve clearances and they all need re-shimming. The closer gaps are 0.08 - 0.1mm, and the opener gaps are all around 0.03 - 0.04mm. I found that I needed to remove the radiator to get at the horizontal inlet valve and even then it was tricky to measure that closer clearance. I am slightly concerned about trying to remove the keepers on the closing shim, particularly on that cylinder. I was considering taking off both cylinder heads so that I could fit the shims on the bench and be able to be confident about the gaps that I have. One of my questions is how easy is it to remove the cylinder heads with the engine still in the frame. I was assuming that once the timing belt is off and the inlet ducts and exhaust pipes are off I should be able to undo the nuts on the heads. I presume I will need to use a ring spanner. Assuming that is the case how do you torque them up on re-fitting. Is this the way to go or should I just struggle and try to replace the shims with the engine still in the frame, making sure that all its orifices are blocked so that no bits of metal drop into the bowels.
Shims. Is there a supplier in Europe/UK. Do the shims have sizes printed on them although I am sure I will have to measure them in case a previous owner has ground them down. I am not overly sure how the opening and closing shims relate to each other. If in my case I fit a larger closing shim, will that also affect the opening gap. Sorry this is a bit rambling but I am normally used to valves with springs. As always any advice is greatly appreciated.
Top

I have never taken the heads off to do valve adjustments unless they have been off already for another reason, although it is much easier to do them on the bench. You should be able to remove the heads with the engine in place but remember you will need to replace the various o-rings at the head joints.
The attached diagram might help to give you a better understanding of how to measure the shims and once you have pushed down the closing rocker insert a 10mm allen key below to prevent it from returning. This willl make it much easier to remove (and replace) the half rings and and closer shim. 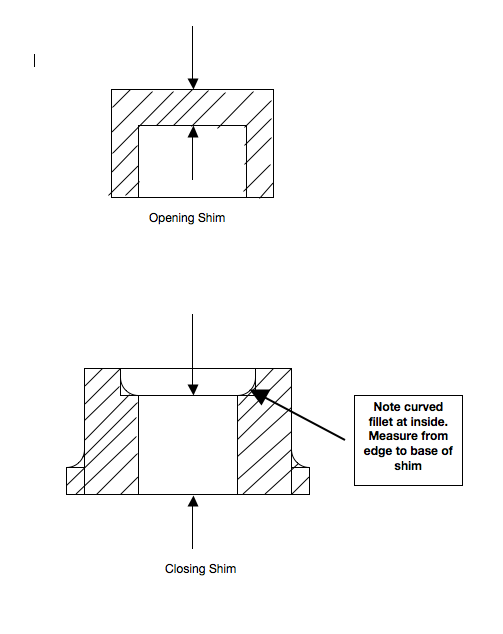 Don't remove the heads if it isn't necessary. It also puts stress on the cylinder studs. (The old types were silver and ocassionally broke, the newer/better types are black.)
A normal ring spanner wouldn't fit on the cylinder head nuts. It needs to be a flat spanner with a thinner ring. Also to torque the bolts a special tool is needed. It's possible to make one if you modify (if I remember well) a 15mm ring spanner and weld a socket nut to it or you can get inexpensive ones on ebay. The ring to socket nut has to have a specified distance (which I can measure, I have one). If that is incorrect the torque will be, too. When applying torque the tool has to be held in 90° angle to the torque wrench. See picture.
Unless you're doing other work to the heads leave them on.

Put an ear plug or one of the valve cover bolts in the oil channel to prevent a halfring finding its way into the engine.

The shims have no sizes stamped on them. You'll have to measure. If one was already ground it's best it's not ground again.
In the US you can get shims from EMS, over here you can only get closer shims from Ducati. Opener shims from Alfa Romeo should fit. I posted that a while ago.


If in my case I fit a larger closing shim, will that also affect the opening gap

No. You do the shimming at TDC. The valve is closed and sitting against the valve seat. Changing the closer shim will only impact the clearance between the shim and the rocker arm. To have any impact on the opening shim clearance the valve would have to move further inside the head which of course doesn't happen if you replace the closer shim. 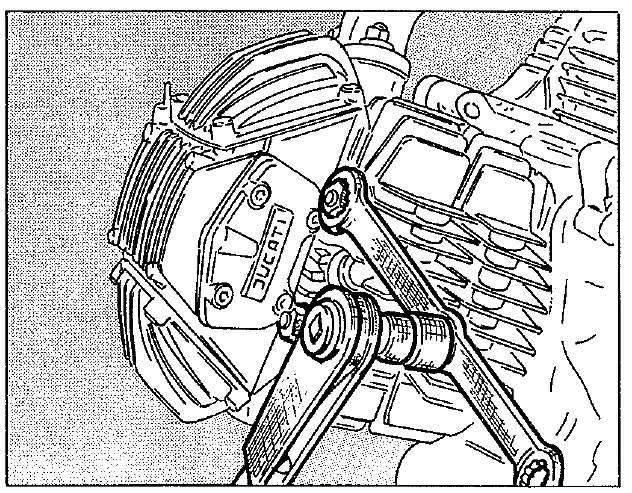 Thanks Derek, useful advice, particularly with the Allen key. Also Paso 750. You have both convinced me to leave the head on, which was probably a last resort anyway. Is there any danger of the valve sliding into the cylinder when the halfrings are removed. Still at least I will have a use for that big bag of ear plugs that I bought.
I had read on this site that the opening shims were available from Alfa Romeo, again valuable information.
Top

Is there any danger of the valve sliding into the cylinder when the halfrings are removed.

If the piston is in TDC, no. When the half rings are removed you can try to lower the valve until it hits the piston to see for yourself or secure it with a peg. On my engine the closed valve to piston clearance is 3.55mm. The valve stem above the valve shaft seal is probably 4-5cm.
Top

Giscard wrote:Thanks Derek, useful advice, particularly with the Allen key. Also Paso 750. You have both convinced me to leave the head on, which was probably a last resort anyway. Is there any danger of the valve sliding into the cylinder when the halfrings are removed. Still at least I will have a use for that big bag of ear plugs that I bought.
I had read on this site that the opening shims were available from Alfa Romeo, again valuable information.

ALWAYS have the head you are working on at top dead centre so that the piston prevents the valve from falling into the cylinder. I use a pair of curved artery forceps with rubber sleeves over the ends to grip the valve below the rocker so that it stays up far enough to get the half rings out. It is also possible to make a tool from a length of welding rod that you can insert through the plug hole to keep the valve up, bearing it against the piston.
1994 907ie
2017 Supersport 939
2015 Scrambler Classic
1982 Pantah 500SL (now sold)

Looking at the workshop manual it has the clearance as 0.1mm opening and 0.02mm closing. It would appear therefore that the inlet and the exhaust valves have the same gap. As the shims only appear to be available in 0.05mm increments I presume you go for the nearest one to the correct value. Is this correct ?
Top

Having looked at the differing information regarding valve clearances on this site I have decided to aim for:-

Ducati has changed the specs over the years and models. So the clearances you list are a bit higher than original 906 specs but alright. However if possible try to stay closer to the min values.
Top

Thanks Paso 750. The minimum it is, or at least I will try to set them at those values. I am just waiting for my bits to arrive from EMSDUC. I found Mike Guidera really helpful.
Top

Just for the record: the distance between the ring and the weld socket nut (special tool for the cilinder head nuts) is not relevant: as long as the torque wrench is attached perpendicular the set torque is correctly applied (physics).

) is that you should be just able to turn the valve by rotating the stem between thumb and fore finger . This is something you sorta grow into so until you get the hang of it do use feeler gauges. Front pot access is not easy , I just lie down on the ground.
Often the collets will come out in pieces and can look a bit " hammered " round the circumference and just replacing any damaged ones will go a long way to getting the clearance back to spec . The factory ones are crap and a far better option is to use MTB collets ( google em up ) they aint cheap but are good value in the long run . I have noticed that the harder you flog the motor the more attention the valves will require . I used to measure the clearances and then remove and individually bag each shim with its respective clearance and take them to the local Ducati mechanic who would then exchange them for ones that would give me the correct clearance , and charged me 10 bucks a piece. Openers can be ground a wee bit . Opener clearance will tend to close up and closers will go bigger so if you and set the clearance at the best end of the range gives you a bit more "wear " before having to reset them again.
Here is a pic of my cylinder head nut spanner , and clutch tool , cant find one of my closing spring tool thing.
Regards
Hamish 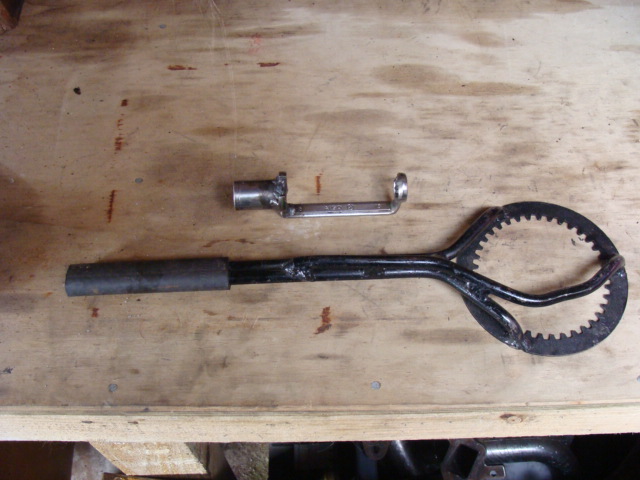 Mc tool wrote: The factory ones are crap and a far better option is to use MTB collets ( google em up ) they aint cheap but are good value in the long run .
Regards
Hamish

Hi. I discussed it with Mike Guidera and went for the MTB collets . Expensive but I agree that they seem like a better option in the long run.

Yeah, I get it wrong every time, and fecking spell check don't help coz even when I googled it wrong it shows the correct pic
I wish I was young again............Id be heaps smarter than last time
Top
Post Reply
24 posts