it is so good that I never looked back and I left it on the bike despite being less sofisticated that the Marzocchi Duoshock I had on my 907.

Anyway, my suggestion is get either a monoshock or a duoshock on the cheap from ebay send it to ORAM and get it refurbished and it will last another 10 years.

Hi Angelix, thanks for your answer....
Yes of course there are many possibilities about the rear shock.... my objective is to install a brand new BITUBO shock absorber, so probably this winter (when I will dismantle again the Paso for paint it completely!!) i will buy the BITUBO..... my question was because I would still like to try to install the unit that I disassembled from my 999, only track use, and "play" a little on the Paso !!

This morning i wrote to ORAM SOSPENSIONI to have some more info about rear shock absorber.... i'm waiting some answer.
Anyway.....
i'm looking also to find this part: 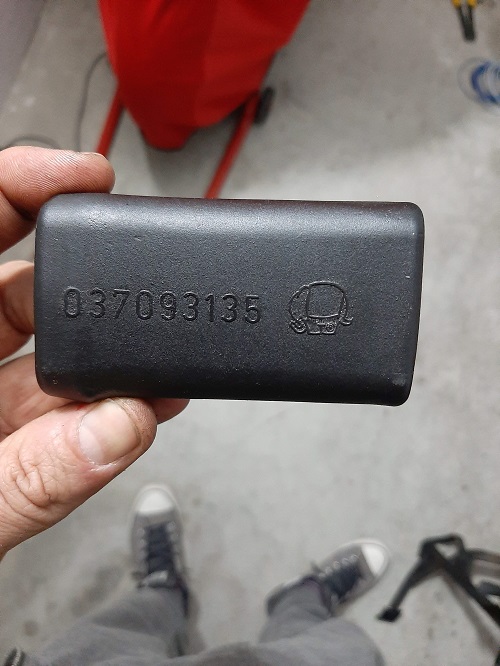 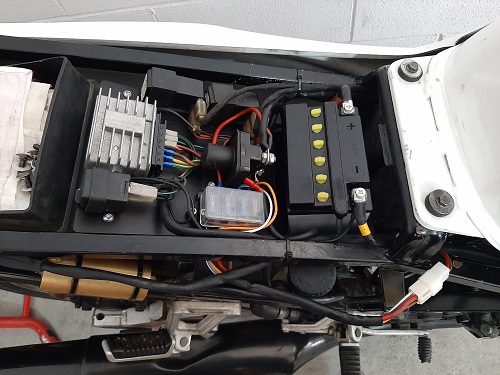 this is how look now the electric panel.... i've change some wire and new connector....
Now i would like change also the oil pressure sensor and oil temperature bulb.... Moreover i have order a new horn, because the old owner install this two big trumpets with some kind of improvised connection!!!! 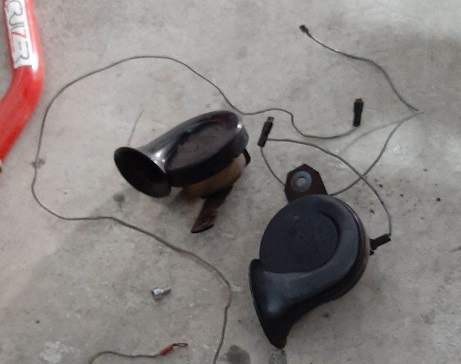 Incidentally: I was able to get 2 original new mufflers (NOS), 1 of which (left side) is made of stainless steel (by means of a simple magnet test) and the other (right side) is not.

They also look identical to each other.

I wasn't aware of any differences.

That electrics plate sprayed black looks nice but I wonder how long it will last. Unless the part is properly prepaired and a special paint and primer is used it won't stick. Anodizing would be better. I polished mine but it didn't take long to become dull again. Another concern when using paint is that the threads and all ground connections must be kept blank and clean. It does sound like your Paso has some electrical issues already.

There's no chance the 999 shock will fit. The one of the Paso is probably the longest Ducati shock as it connects to the linkage below the swingarm while most others mount somewhere to its upper side.
I do have an almost new Wilbers shock if you're interested. It's for the 906 actually but would fit.
I had a Bitubo and found it too hard no matter how low the adjustment was set. Sold it again and bought a new Marzocchi.


But first look which brand of shock you have, a few were delivered with an Ohlins (worth knowing: the Ducati Paso 750 was de first production motorcycle for the road with standard an Ohlins shock).
On the right side of the frame under the cover directly next to the battery, you will find the adjuster for the spring pretension, here you can see if it is a Ohlins or not (sticker).

Also the Öhlins has a large black ring adjuster on the bottom while on the Marzocchi it's a small adjuster that requires a screwdriver to turn.

Used dashboards aren't that hard to find. Rudy has some (he may also have those oil cooler rubbers) and motosparepartner, too. The latter has an empty housing for €15. However I'm not totally convinced by the condition of their parts for sale. A while ago I bought an Öhlins shock from them. It was cheap but I still sent it back at my own expense as the condition imo wasn't good enough to keep it for spare parts.

You clearly didn't see this one

Besides that there are temperature gauges in °C and °F the scale of the water temp gauge has a wider range, doesn't it? But as Hamish said, it doesn't really make a difference. It'll work.

here they are cheaper: (the question always is about the actual stock)

Hi Paso750, thanks for your answer....
About the plate i prepare it with primer and then black paint for high temperature.... i don't know how long the paint resist, but for the moment is the fast solution to improve the appearance of the electrical panel! for sure anodization is the best way to have a long/final solution.
All the connections with the grownd was cleaned to have a good contact, so from this point of view I am sure that the connections are efficient.

The idea to install the Showa removed from my 999 it's only because I have the shock absorber available at no cost .... moreover I have the possibility to build some type of adapter to install it (working for a company that builds industrial machinery, I have material and machinery available to build anything)..... i don't know, i will try.... if the final result or the necessary work does not satisfy me, I will buy a new shock absorber.

Finally, the dashboard....
after reading your topic about the led's installation, I'm going to do a job, I hope very good, like yours...

paso750 wrote:here they are cheaper: (the question always is about the actual stock)

Thank you very much! I ordered them right away, great price !! I had previously looked on this site, but with the translation and without images I had not found the piece despite having entered the part number! Thanks again
Suzuki GSX-R 600 '00 (ex)
Ducati 999 '05 only track
Cagiva Elefant 750 '95 (ex)
Ducati Multistrada 1200S Sport 2012 (ex)
Ducati Multistrada Enduro 2016
Ducati Paso 750 '90
Top 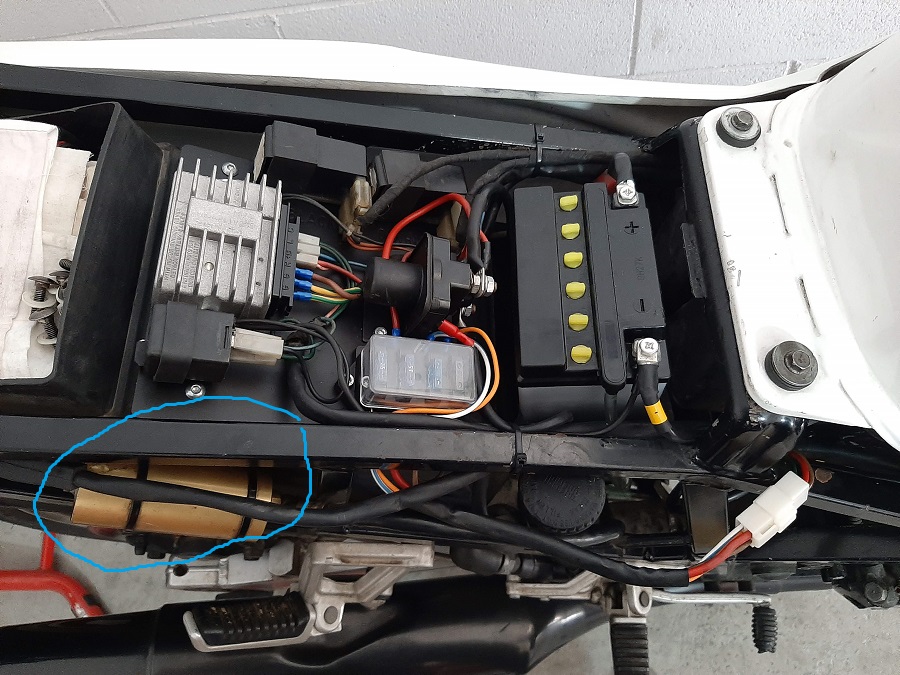 it's the tank of shock absorber..... isn't the original one..... and the shock it's welded very bad, probabli it's from another bike adapted to the Paso....

About the fuse i have only this picture for the moment (i'm in office, i can't make other photos.... if you need i will do this eveing) 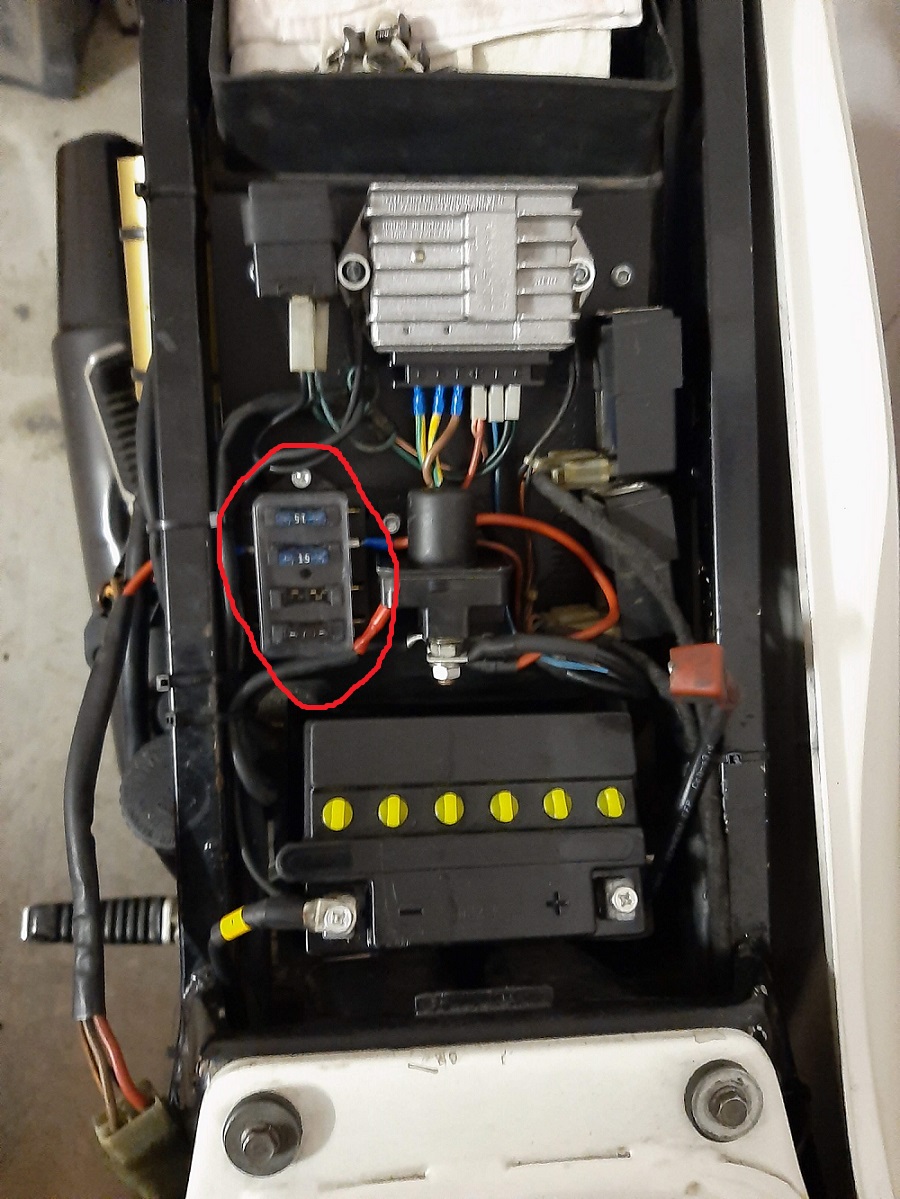 And sorry about my question, but someone in this forum ride his Paso on track!?
My idea when i will finish to restore my Paso is to ride it during days of free practice on the track for historic motorcycles... 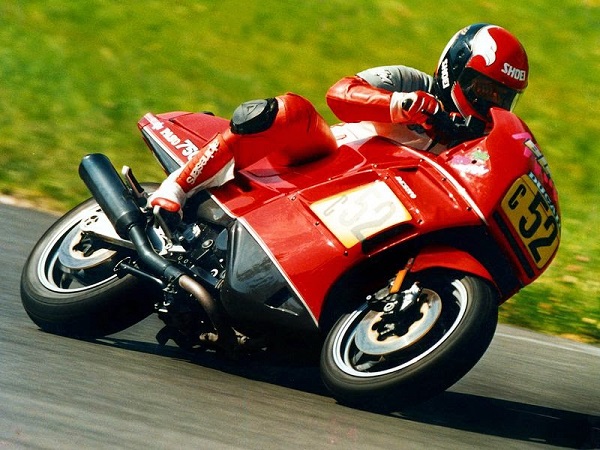 Have you asked "Rudi" from DUC-ONLY-Parts: rudyberends@kpnplanet.nl?
He is a well known used parts supplier for "older" Ducatis (and used on a regular base by several of this forum) and I would assume he has still some of these rubbers for little money.
Just in case the other suppliers can't supply, what sometimes happens, or for future parts.
Bimota SB4-S - 1984
Ducati Paso 750 - 1989
Suzuki SV1000S - 2008
Ducati Monster 796 abs - 2010
Top

Have you asked "Rudi" from DUC-ONLY-Parts: rudyberends@kpnplanet.nl?
He is a well known used parts supplier for "older" Ducatis (and used on a regular base by several of this forum) and I would assume he has still some of these rubbers for little money.
Just in case the other suppliers can't supply, what sometimes happens, or for future parts.

Regarding my beginning question about the installation of 999 Showa shock absorber i have bad news.....
As Paso750 and Frank.61 said, the wheelbase of Paso shock absorber is to long respect 999.... 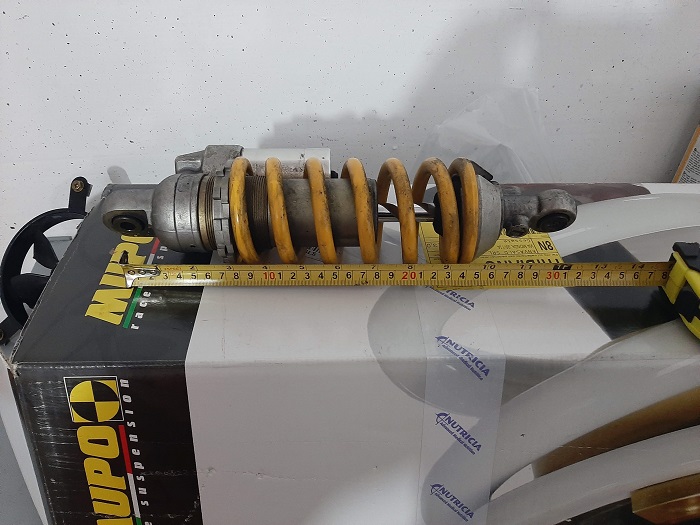 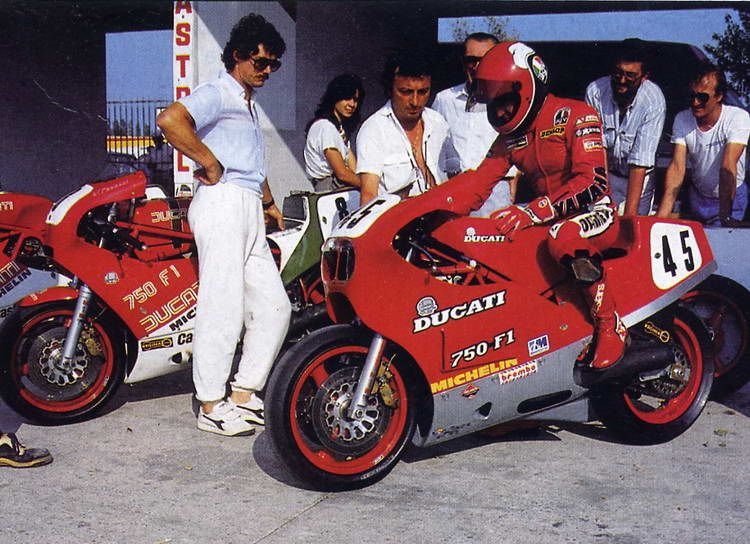 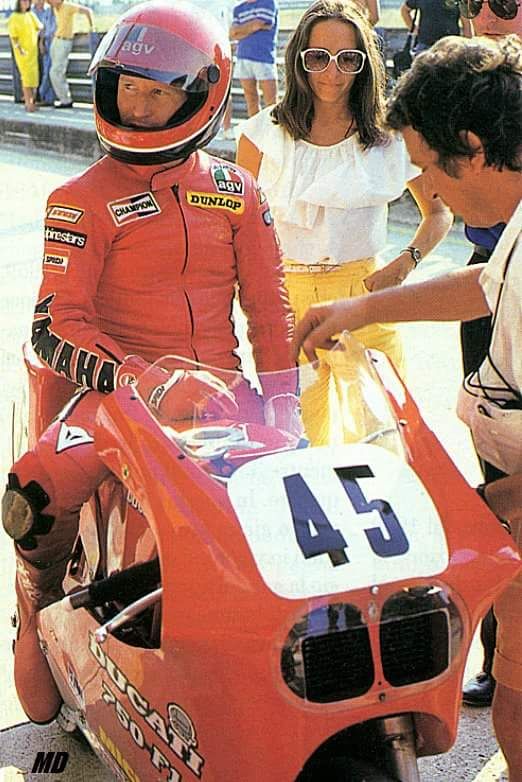 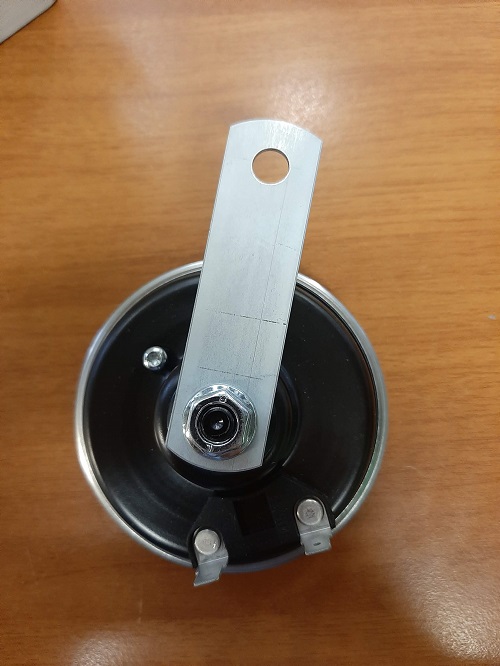 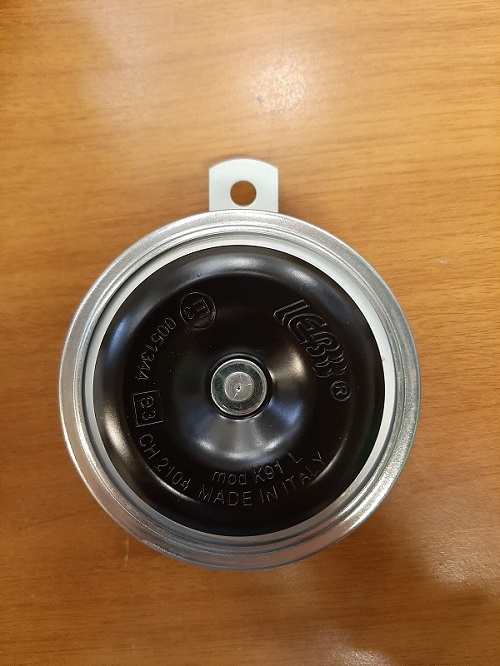