I decided to replace the starter on my 907ie. I searched here and elsewhere and found no comprehensive description of the left engine cover removal process for this model or any with the same motor. Maybe this is so obvious it doesn't need a detailed guide, but I felt the need. I got several tips here and found my way through the job. Here's my step-by-step guide. Please add your corrections and comments, and I will update this post.

1. Put the bike on the main stand. There are some suggestions that you can avoid oil loss by leaving the bike on the ground and leaning it over to the right side somehow. Draining the oil will avoid this issue but is not entirely necessary as the oil loss with the bike upright is not more than a few ounces. EDIT: I removed the cover again. This time I put a block of 1x2 under the left side mainstand leg (Note for the global audience: 1x2 is dimensionally 3/4" x 1-1/2"). The bike was perfectly stable and this cut the oil drip to almost nothing. I recommend doing this.

2. Remove all the fairing pieces except the right side rear panel. You can do this job w/o removing the left rear side panel, but removing that panel allows you to unplug 2 proximity sensors (crank and timing) from the harness instead of removing them from the left side engine cover and potentially damaging them. Their plugs are tie wrapped to the left side upper frame rail below the gas tank. I recommend doing this. Regardless, you need to either cut the tie wraps and unplug the sensors or at least remove the timing (rear) sensor from the cover.

3. Remove the shifter linkage from the gearshift shaft. Note/mark its position before removal to guide reassembly.

4. Remove the left subframe piece with the sidestand. This is necessary for the left side cover have enough clearance to be removed.

5. Remove the front hose from the radiator to the water pump. It didn't occur to me at the time to clamp off the two more flexible coolant hoses. Barring doing that, be prepared to catch about two liters/quarts of fluid. I cut the top off a 2 liter soda container and used it to catch the fluid for reuse. after it is almost done draining, remove the upper and the rear hoses. The rear hose may be more easily removed after the cover is partially removed. Alternatively remove the other end of this hose from the head instead. I discovered that makes it easier to remove and reinstall. I tie wrapped the front up and out of the way.

6. Consider removing the water pump cover. This is not 100% (or even 75%) necessary, but it makes aligning the water pump drive easier during reassembly. You can eyeball align the drive before reassembly and leave the water pump cover intact, although when I tried to do it that way, I had a lot trial and error doing this, requiring repeated removal of the cover during installation before I got it right. This is not ideal as you risk maring the sealant with repeated attempts.

7. Remove the clutch slave (3 Allen bolt). One of the cover bolts is hidden under the slave. Swing it up and out of the way. I set the bolts aside. Remember that the hydraulic line routes behind the rear coolant hose.

8. Remove the plastic chain drive sprocket cover. Keep it together with its two bolts.

9. Remove the 13 cover bolts. Note there are 3 different lengths. Refer to bolt pattern image attached when reassembling. I didn't pay attention to the sprocket cover and clutch slave bolt lengths, setting them aside separately.

10. Remove the brass screws and the small cover over the end of the crankshaft. Note the o-ring inside the small cover. It stuck to the cover and I reused it. Of course, it's safer to replace it, but it's a simple fix if it happens to leak later.

11. Screw a suitable puller on the cover that will push against the center of the end of the crankshaft. A Ducati-specific tool is readily available, and there are many alternatives that will fit, including steering wheel pullers and gear pullers. The cover should release and pull off easily with the only resistance being the pull of the alternator magnets toward the stator. If it requires any significant force, double check for an overlooked cover bolt (thank you Nick).

12. Swing the cover up and out of the way and put a tie wrap through a bolt hole and around an upper front frame member. Actually, it would be best to remove the cover entirely from the bike and take it to a workbench to more easily clean off the gasket remnants. In this case you need to unplug the two yellow alternator wires and the crank (front) sensor. I rather recommend this as I found that the alternator wire connectors were corroded inside and the wire insulation was worn away in spots. My bike is so clean I was surprised by the corrosion and it seemed cleaning them improved charging voltage. Jeez, this should have been a waterproof connection.

13. If replacing the starter, remove the two visible starter bolts. The third bolt is behind the starter idler gear. The gear will rotate easily in one direction. Turn it until one of the holes in the gear lines up with the hidden third starter bolt. Only one of the 3 holes will line up. Remove the power wire to the starter and that last bolt and catch the starter as it drops out of the motor. Note there is a thin gasket that seals the starter face to the motor. It may remain on the motor and can be reused if intact. Well, at least that's what I did. So far, so good. Install the new starter.

15. Clean the mating face on the engine case and apply a bead of 1215 to the mating surface and spread it smoothly. I put a thin coat on both mating surfaces. If the oil was not drained and the bike is upright, a small amount of oil will continue to drain from the case onto the mating surface. It would be wise to wait overnight for this to stop completely (Note: Tilting the bike slightly by placing a 1x2 block under the left main stand leg obviates the drainage). Even if the original gasket looks pristine and intact, don't be tempted to reuse it. Don't ask me how I know.

16. Align the water pump drive with the position of the slot in the shaft in the motor.

17. Reinstall the engine cover carefully. The rear-facing arm on the cover just barely clears a frame member. Aligning the cover over the gear shift shaft and clutch rod helps a lot in positioning the cover for installation. Be extra careful guiding it over the clutch rod, as it could hit a sealing surface. You could just as well remove the rod to avoid this, but I found guiding the cover over both the gear shift shaft and this rod really helped get the alignment right. A little sealant might get on the rod, but if you coated both surfaces, this is not an issue. Just wipe it off the rod once the cover seats. Also, I had some concern the gear shift shaft teeth would cut into its seal, but after at least a dozen passes of the seal over this shaft, it's still intact.

19. If you removed the water pump cover, you will need to remove all gasket remnants until the surface is clean and shiny. A fair amount of my gasket was firmly embedded on the engine cover and required considerable careful scraping. That gasket is available as part 78810063A. I reassembled mine with a thin smear of Three-Bond on the gasket, although the factory installs this dry.

20. Reinstall the coolant hoses. The front and top hoses are fairly easy to get back into place. The rear hose is a bit of a hassle. I found it easiest to remove it from the head end instead of or as well the pump, and work it on to the water pump first.

21. Top off the oil if low. Mine was still close to the maximum line. Start the motor and check for oil leaks from the engine cover.

22. Add the captured coolant back into the reservoir. Careful, as it will overfill easily at first. Squeezing the lower radiator hose after initially filling the reservoir will suck the reservoir down and should prime the pump. After that, running the motor should suck the fluid into the system, although I found I needed to repeatedly go back and squeeze the hose before the level stabilized. Wait for the fans to come on to assure the coolant has completely filled the system.

23. Reassemble the remaining parts (clutch slave, sprocket cover, subframe, gear shift lever, fairing). Lacquer thinner is recommended for clean up of any excess Three Bond that oozes out, but if done promptly, a paper towel with some rubbing alcohol seems to work well enough. 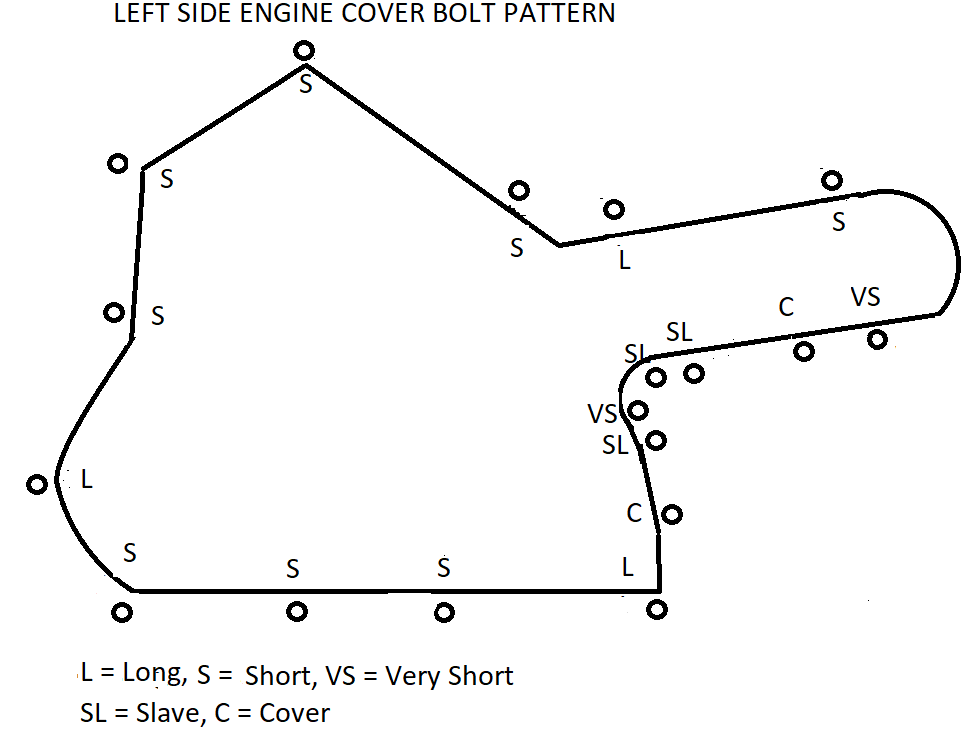 I made a few edits to the original. This included leaning the bike slightly right by placing a small block under the left main stand, tie wrapping hoses out of the way, completely removing the cover to a workbench instead of hanging it out of the way, and correcting a comment about the rear arm of the cover contacting a frame member.
Bill
91 907ie
Buckeye, AZ.
Top

A few more edits today. I could edit out some of the alternative ways of doing this or that and simplify it to what seems to work best, but I think I'm done with this. Went out for a few hundred miles yesterday. All is good now.

Nice and Concise Well Done and Thankyou. This is what makes this site so useful.

A few more things crossed my mind, so I did some more edits today...one about possibly clamping some of the radiator hoses and another about 3 bond clean up and a few more minor clarifications. I've worked on my motorcycles for more than 50 years, but this job intimidated me a bit. The manuals are very spotty and strangely translated. They remind me of the first shop manual I got back in the day for a '62 Honda 305 Scrambler. It was hilarious reading. This was an official Honda shop manual. On the cover it said "Honda Scrumbler". Seriously. Anyway, this is really not much of a job after all, but I believe these tips will make it easier especially for others new to Ducati, like me.
Bill
91 907ie
Buckeye, AZ.
Top
Post Reply
5 posts • Page 1 of 1