My clutch started making nasty screech noises when it was pulled.
It wasn't all the time, seemed to be worse when the engine got warmed up but very inconsistent and more likely to happen with light pressure on the lever... I had recently changed the O Ring seal on the slave piston and everything seemed fine with the bearing but that seemed like the obvious point of failure and would require a complete piston as my bearing and piston are one unit

I pulled the cover off today and the bearing turned absolutly fine, no sign of any wear but then I cleaned off the face of the button in the center of the pressure plate and it was loose. Off came the pressure plate.

The center piece (button with a short locating spigot) from the pressure plate has cracked the three weld points and has obviously been spinning as the mating face to the plate is smooth and polished and I figure that is the noise I have been hearing.

Has anyone else had this happen and if so how did you re attach the parts? A New plate seems to be hens teeth rare and a pretty grotty used one is £££
Getting any kind of engineering work ie Braze or Weld is a bit difficult under lock down, would a cold weld epoxy be up to the task - Not sure how hot it gets in there.

Also any ideas what may have caused it to crack the welds? They are quite small "Tack" type.

this happened to others before. Here's one old topic: http://forums.ducatipaso.org/viewtopic. ... ate+broken

You can try to ask Rudy (you'll find his posts w/ email address in the classified section). Maybe he has one.
Don't know why the pin may break off since the whole plate only does a little axial movement. Check the hole were the pin slides into. Be sure it's clean and that the pin moves freely. When you have your plate repaired or replaced put a minimal amount of grease or oil on the pin and wipe it off again. Just as a rust prevention. Wipe it off as you don't want any dust sticking to it. 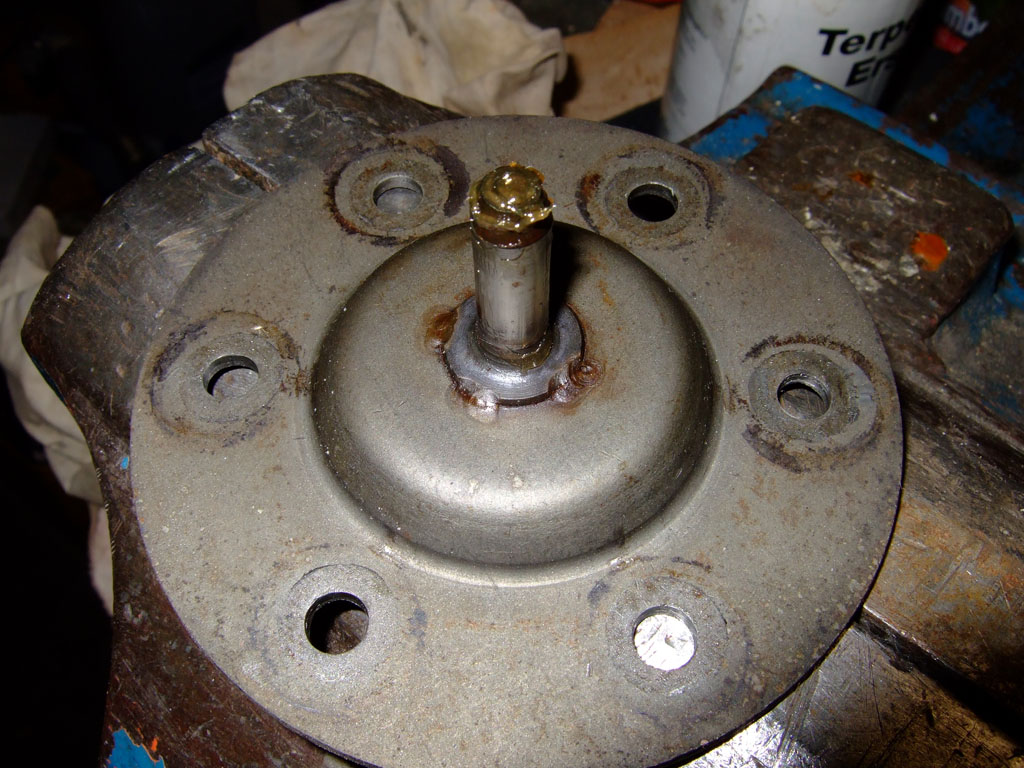 Thanks for the info, I have emailed Rudy and he thinks he may have one

My pin hasn't passed right through the plate but there is about 1mm of metal missing where the two have been rubbing so it would have worn through eventually...
It's certainly a question why the welds failed, given the amount of wear it must have been like that for a while and started screeching due to me cleaning that area up when I changed the seal.
The only cause I can come up with for the welds failing is that it has had one or two clutch springs that were weak and this has made the pressure plate tilt slightly each time it was depressed - Unfortunatly I decided to change the springs when I did the seal just on the basis they had been in there a long time and chucked the old ones...

All the best, Andy
Top

Years ago my Ducati guru ( I was a ducati noob ) told me that the fix was to chop the spigot off , weld up any hole left , smooth it off and refit pressure plate. There is also a fix for the bearing where you fit and modify a later slave piston assy, worth a look if your having issues with the old slave piston assy
I wish I was young again............Id be heaps smarter than last time
Top

With the speed that thing is spinning I consider cutting it off rather radical. Would surely work, but wouldn't recommend doing so.
Top

Yeah, its one of them things where you gotta ask why would they put it there in the 1st place if you can just chop it off.....bit like our apendix maybe. If it wears and breaks off youd have to think its taking a bit of punishment .....and is thusly doing something. When the clutch is engaged the pressure plate,spring plate ,springs and the plates are all held nice and concentric , but when the slave pushes the spring plate and pressure plate back into the clutch assy that pin is the only thing holding all that rotating mass concentric. Probly realy needs a bearing .
I wish I was young again............Id be heaps smarter than last time
Top

But am I missing something: why can't you just have this plate re-welded properly?
I have the same phenomenon (like almost every Paso 750) that the welds are torn.
I agree with Gerhard that I would never glue this with epoxy.
But again, I'm missing something but is welding so difficult?

When the clutch is engaged I assume there is hardly any tension on this steel pressure plate, since the clutch discs are one "massive" pack and also the aluminium pressure plate has maximum grip (overlap - meshing) with the steel clutch basket which on it's turn is fixed/centered on the gear main shaft.

But again, if you tack them together (welding or soldering) all should be ok I assume.

Let me know if I explained it in a way you could follow my explanation ….

But again, I'm missing something but is welding so difficult?

It might just be the current global situation and the lock down. For a while you couldn't find an open shop. Maybe in some places it's still so.
Top

I understand but apart from that, nothing wrong with simpel welding I assume?

I guess not everyone has access to a welder, and there is always the possibility that it could be rewelded in the wrong position. Mine had already been welded by the po and at the time it worked and I was a noob so I left it as it was , but I did think the whole thing was a bit crude and did look at making a better one , but there aint a lot of room in there and that thin steel plate is about all that would fit in there. Maybe make a longer spigot that is a better fit in the input shaft.
I wish I was young again............Id be heaps smarter than last time
Top

You could consider brazing, the diameter of the hole is 16mm and the diameter of the "mushroom" is 20mm, so an overlap of 2mm.
Should work and if it doesn't it's easy to remove the 2 parts with a "little" heat.
Problem for me is that I have no idea why the weld cracked in the first place.
Bad welding material, cooling down etc.?

I think the welds break/crack because the spigot is welded to what is a thin bit of steel plate and it flexes a bit during use, maybe because the clutch springs are not all the same strength and sorts cocks the plate /pressure plate assy . Anyhows I did think about getting a large steel washer and welding it in there to stiffen up the plate. I guess if you wanted to get serious you could check the springs on something like a valve spring tester to check them for uniformity .
I dont go so much for braising , coz it aint that strong and its a proper bastard to remove completely as it gets into the pores of the steel ( like water into a sponge )and you have to remove a lot of steel to get all the braise out so you can then reweld with a mig , tig or acr welder. Anyhow my Paso is getting cleaned up ,repainted and parked in the hall where the buffet is now . I dont expect to ever ride it again so I dont really care , stupid thing is that I bought adjustable cam pullies and I have just ordered one of them crankshaft turning tools you can fit a degree wheel to so I can set the timing before I never use it again .
I wish I was young again............Id be heaps smarter than last time
Top

Just before I headed back home the loverly chap who had said "I'll fix that for you" called me to say it was ready and my journey back went via his small workshop to my garage.

Bill has a small workshop in a building that is listed by English Heritage as a Forge. Its actually not far from where I live and I had guessed it would be closed but whilst taking my "Allowed Daily Exercise" one evening I spotted a small note on the door that they were still takeing work if you phoned them.
A couple of days later I met Bill, a small and slightly stooped but absolutly sprightly 86 year old and handed him my bits with a sketch of how it worked.
He looked at it, scratched it, and said it was probably dissimilar metals and Brazing was a better option than Welding as the Braze would stick to both and he could do a full ring of Braze without the parts overheating.
It cost £10 and if it fails whilst he is alive he will repair it

It's now back on the bike and working (Vacume Bleeder - Love them) and I will be giving it a good test before I take the bodywork off again to check the belt tension (Love - Hate relationship between Loving the Look of a fully faired bike and Hateing the inaccessibilty of EVERYTHING).

Just thought, when I pull it apart again I can take some pics of how it's faired

2nd Thought, the Centre basket is keyed to the same shaft that the centre pin locates in and this is geared to the rear wheel so when the clutch is engaged this whole assembly is stationary in a rotational sense but will take lateral impact (That Classic Clutch "Chatter Noise"). It will / could also be subject to some lateral force by the springs which was my 1st suspect but thinking about the action of multiple springs (more than 4) on a ring they would need quite a differance to cause a significant tilt?
Top
Post Reply
22 posts