The party never ends. No sooner do I revel in the apparent success of getting my Paso's Weber sorted than I discover something of a disaster. I'd noted some oil leaking, apparently from the timing layshaft seal. Forum searches suggested this is fairly common so I wasn't too worried. With the Weber now working I decided to remove the cam belts and the layshaft timing gears to inspect the seal.

It wasn't the seal leaking. I'd been told that Owner #1 was a hot-head with a penchant for wheel-lifting antics and the like, behavior that resulted in his supposedly blowing up 2nd gear. That happened when the bike was new and at around 1,000 miles. Owner #2, with whom I'm in contact and who told me the tale, put around 6,000 miles on the bike. What he - and I - didn't know is that the damage from the gear-blowing episode extended to the case. The case was cracked, and the crack was patched with epoxy. Some 30-plus years later, the epoxy was lifting, hence the leak.

As the pic shows, it's a pretty good crack. What I don't get is, if someone had to pull the engine apart to fix the tranny, why in the world wouldn't they get the crack properly welded? I'm sure I'll never know. But what I do know is the case is cracked. So my question is, do I tear it down and get it welded? Find used cases? Given that the previous "repair" lasted 6,000 miles I'm almost tempted to try sealing/patching it again. It's not a high-stress area, but then, I have no idea how big the crack was to begin with and whether the crack has been spreading. Input welcome.

And I have no idea why the image is displaying upside down. Tried multiple times to modify it to make it display properly with no luck. Just stand on your head. 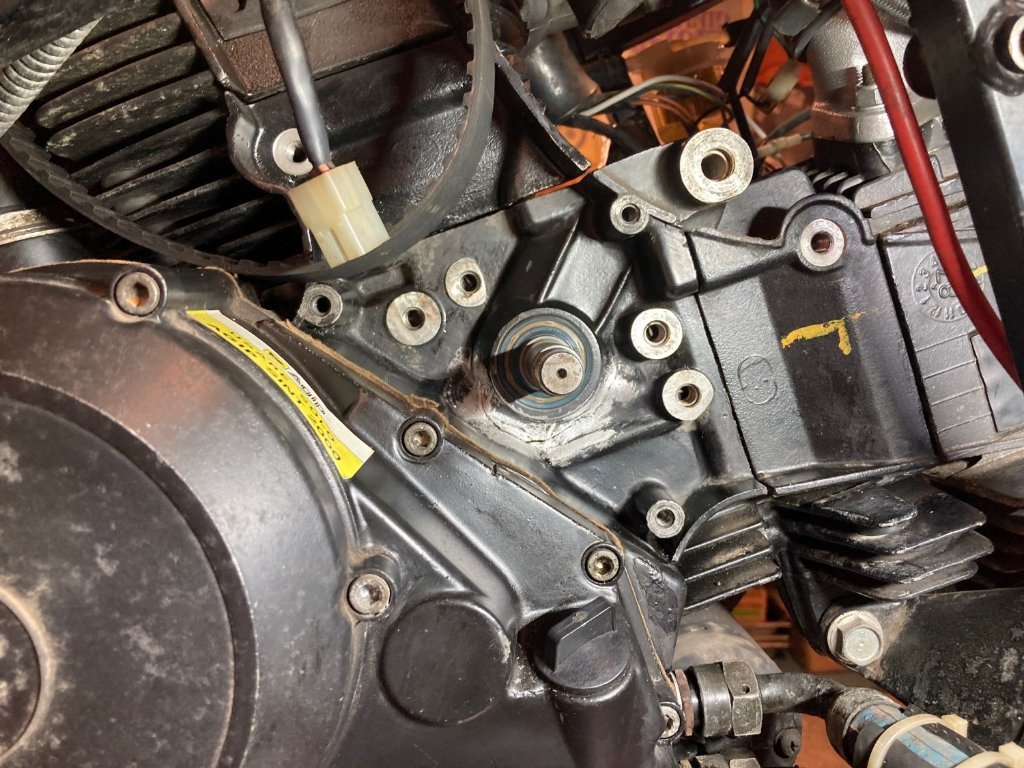 I turned it around

Considering that any attempt to repair or replace the case is going to involve a complete strip down ,I guess it depends on how much effort you want to put into it , but I think I would give the area a good clean up ,bare metal , and put some metal based epoxy ( devcon ) on the wound and start looking for a whole nother motor. A bonus here is that you get a whole motors worth of spares.......and you could fix the case at your leasure ......but Im not sure about that coz that crack is real close to that oil seal and bearing positions.....dunno if you could weld ally up that close and get away with it
I wish I was young again............Id be heaps smarter than last time
Top

We think alike. I've already found a set of used cases in excellent shape. I've used a dremel to carefully clean the area and get to clean aluminum, followed with multiple spray/wipe downs with brake and electric parts cleaner. It's pretty clear that whoever did the first "repair" spent little time prepping the area and just globbed on epoxy putty. It lasted six years, so there's every chance a more thorough job will last longer. It's a low-stress area so I'm not worried about it suddenly blowing up. I figure the worst that can happen is that I discover the crack is spreading and it starts leaking again, and I end up replacing the engine case. I don't think there's any way to weld it up without stripping it down first, and if I'm going to strip it down I'd rather just replace the case. I'll report back once it's riding season again and I get a chance to put some miles on it.
[img] 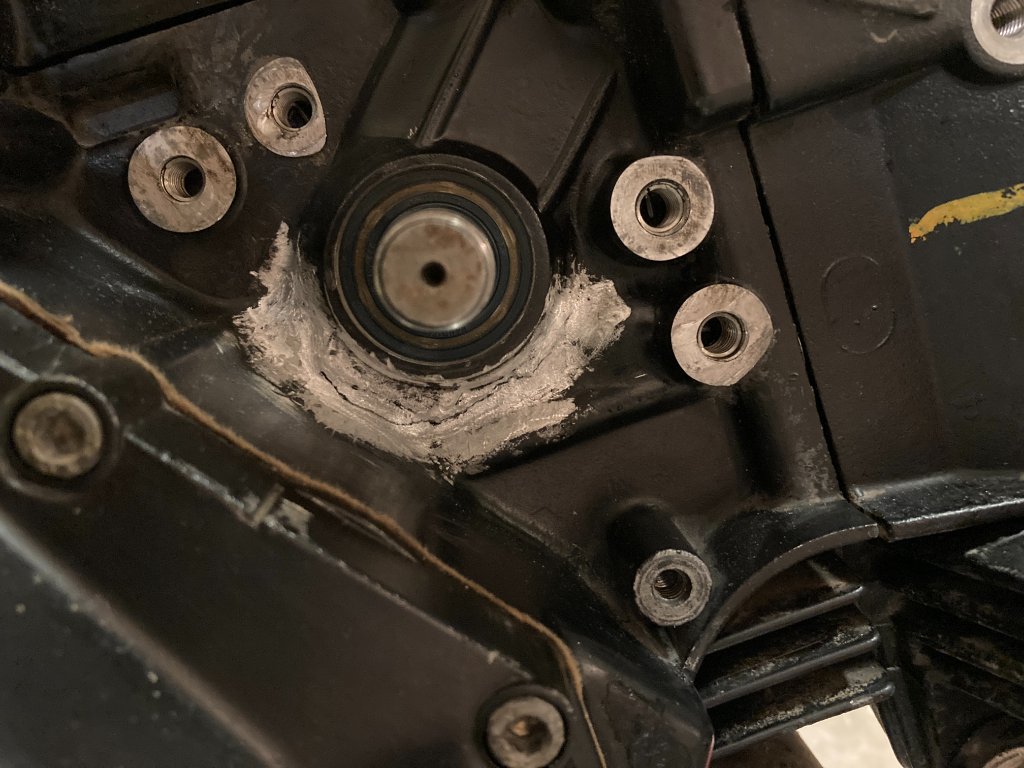 I had a hairline crack near oil lines to cooler on my M900.
Used a mandrel to smear together the metal to stop pressure, then thoroughly
cleaned surface and used 24 hour Araldite epoxy.
Lasted 3 years/over 20 000 kms before l got it welded up.
Gert

randtcastell wrote: ↑Fri Feb 25, 2022 6:09 pm Good luck with the epoxy. Thanks for your posts. By the way, I really am stoked that you're writing about it in "the magazine" I've been hoping for a Paso feature for many, many years. What luck, you've fallen for one! :^)

Tamburinifan wrote: ↑Sat Feb 26, 2022 2:20 pm I had a hairline crack near oil lines to cooler on my M900.
Used a mandrel to smear together the metal to stop pressure, then thoroughly
cleaned surface and used 24 hour Araldite epoxy.
Lasted 3 years/over 20 000 kms before l got it welded up.

I've managed to get the Paso out several times since my case "repair," and so far it seems to be holding fine. No leaks of any kind. And still running great on the Weber! Not the prettiest "repair," but seems to be working, and besides, it's mostly invisible once the cam belt cog and belts are installed. 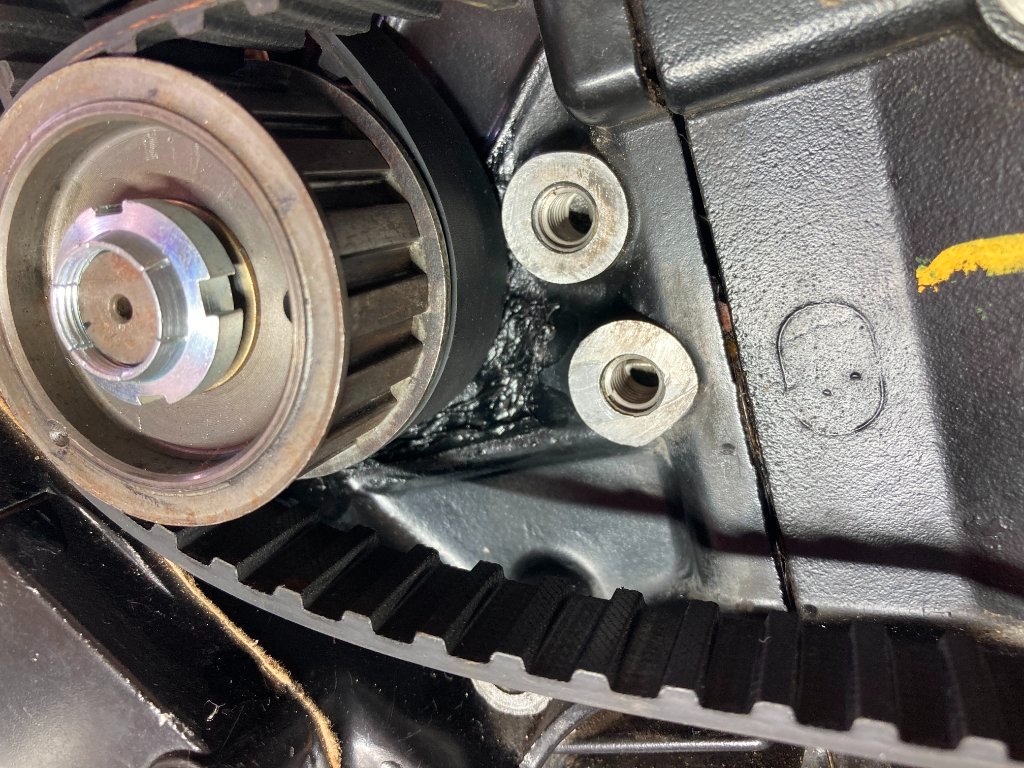 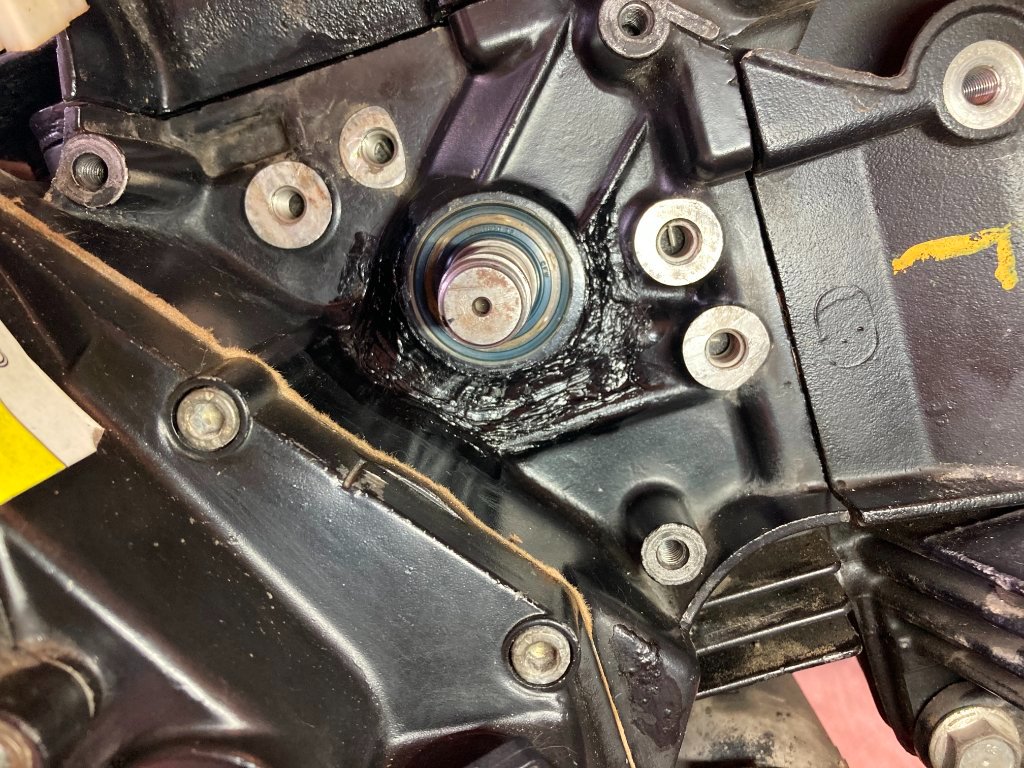